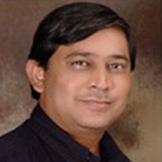 Amit Okhandiar has more than 28 years of experience in managing technology businesses. He founded MLOGICA in 2004 to focus on enterprise data management which has led to flagships products such as AMS – Automated Migration Studio for Cloud Migrations and MCAP for Xtreme Big Data Analytics.

Previously, as Director of Strategic Services at Sybase he was responsible for managing the competency centers, operations, and budget of the Worldwide Professional Services business. During his eight-year tenure at Sybase he managed their North America Professional Services delivery and advised Sybase executives on mergers and acquisitions, as well as strategic investments. Amit was responsible for establishing worldwide competency centers for mobility, enterprise data management, enterprise application integration, project management office, quality management systems, and international offshore development centers. His responsibilities have previously included profit and loss center management US and Canadian operations.

Amit also worked in management roles and has led practices at PricewaterhouseCoopers for technology due diligence in their merger and acquisitions practice, Tandem Computers (Hewlett Packard) for their worldwide data warehousing practice, and Sequent Computers (IBM) for their Western States in enterprise architecture planning, decision support, and Oracle ERP competencies.

Amit received a certificate of special congressional recognition for his outstanding entrepreneurial skills and community service from the United States Congress in 2006. He has also received certificates of commendation from the Sheriff of Los Angeles County, Speaker of the Assembly of the California Legislature Assembly, and the Supervisor of the County of Los Angeles.

Amit has a Bachelor’s degree in Electrical Engineering from the Illinois Institute of Technology, Chicago, and an MBA from the University of California, Irvine.